Coming from the eastern area, take the A 11 to the Uckermark junction and then take the A 20 in the direction of Stralsund to the Stralsund/Rügen exit. Proceed as described above.

An alternative to arriving via the Rügendamm is the Glewitz ferry, which runs from Stahlbrode to Glewitz on the island of Rügen. Please note the information on the motorways or on the B 96. The ferry runs from April to October.

Since the end of 2007, the new Rügenbrücke has enabled an ultra-modern and convenient connection between the island and the mainland. This extremely convenient connection of our north-east region to the German route network increases the attractiveness of the island for German tourism invaluably. It is now quicker and easier for travelers to get to Rügen and no longer need to pay attention to the bridge opening times. But the new bridge is also an attraction in itself. The technical data of the modern sound bridge are impressive. The mighty pylon, on which the roadway is suspended by means of a steel cable construction, is 126 meters high. The highest road point above the fairway is 42 meters and offers a great view over Stralsund, the Strelasund and Rügen. The total length of the bridge is around 2.8 km, making it one of the longest bridge structures in Germany. 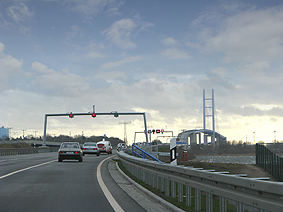 Arriving by train: You can travel by train in an environmentally friendly manner and without traffic jams. There are good IC and IR connections to Bergen train station from all over Germany. There are also night train connections and car trains to the Sassnitz ferry port (approx. 10 km away).
You can easily plan your journey by train using the DB travel information service.